All About Everest Base Camp

How proud would it be if you achieve a feat which is not possible by all the humans on earth? I bet each one of us is dreaming about it and some are even planning to go ahead with it. For a runner, weight lifter, musician, it would be beating their records. For a hiker or a trekker, it would be conquering the highest mountain ever discovered by humans. That’s right, the highest peak in the world, Mount Everest. Thousands of mountaineers and trekkers come from all around the world to achieve their biggest dream. Below is a guide, if you are one of the trekkers who wish to witness the earth’s Heaven.

This trek is one of the most popular and adventurous trek spots in Nepal as well as in the whole world. Thanks to Edmund Hillary and Tenzing Norgay, we now have a fixed route for you to achieve your dream. It takes us through several Sherpa villages, glaciers, and monasteries with stunning views throughout. This trek is considered the grandest walk in the Himalayas.

Everest base camps consist of two base camps, namely the South Base Camp which is in Nepal at an elevation of 5,364 meters, and the North Base Camp in Tibet at a height of 5,150 meters. Both are on opposite sides of Mount Everest. These camps are considered as rudimentary sites on Mount Everest and are used by trekkers during their climb.

Perks of the trek!

No worries if you get lost, the Shepherds (with no language barrier!) in the villages would take care of you and help you reach the camp.

The best time to make the trek possible is between September to mid-November and between March to mid-May. If I were you, I wouldn’t choose winter because the freezing ice and snow would increase the level of difficulty while trekking. The peaks are literally lost amid the clouds during summers and that would be something I would see for myself! Thus, April and May it is!

Why Everest Base Camp?

The trek starts from Lukla. You would pay millions to take the 40 minutes flight from Kathmandu to Lukla because of the awe-inspiring views of the Eastern Himalayas. On touching the ground at Lukla airport, you will get splendid views of the nearby villages on the majestic peaks and the bird’s-eye view of Lukla.

The headquarter of the Everest region, the Namche Bazar is the next stop. You have an absolute 2 days and to utilize it you could trek to “Everest View Hotel”. Note: it’s the world’s highest located ‘five-star hotel’. Enjoys the view of majestic Everest from its dining hall sipping a hot cup of tea!

Proudly considered as the largest monastery in the Khumbu region, this monastery is situated at 3,867 meters. Also known as Dawa Choling Gompa, it is a sacred Tibetan Buddhist monastery. You could feel the positive vibes all over due to spirituality and aura like nowhere. Ancient articles and scriptures reveal the history of the monks and the monastery are worth knowing. Don’t miss the prayer ceremony that happens every day so you trap the vibe of harmony and peace.

Indeed, you cannot view Everest in full from the camp. But no disappointment, we got you covered. Kala Patthar presents you with a jaw-dropping view of the majestic Mount Everest. It is the best and close vantage point to view Mt. Everest. Pretty sure you would stare at Everest for hours in the cold!

Mt.Lhotse at 8,516m, Mt. Cho Oyu at 82,011m, and Mt. Makalu at 8,463m are part and parcel of Everest. The trekking to the camp is packed with several snow-capped mountains that would instantly captivate you. Meaning, it’s not just the Everest that’s waiting for you.

Enormous landscapes and the breath-taking views of mountains are abundant throughout the trek. One is very blessed to make this possible. And when you are done with it, you would have none on your dream list! 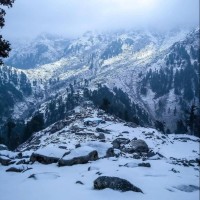